Current US Senate leadership and Officers 2023

As the 2022 midterm election results finalize with the conclusion of the Georgia Senate run-off races, the outcomes are contrasts to the narratives and expectations that carried on throughout the electoral process. Instead of a presupposed widespread failure for Democrats on election night, Republicans are now the party fighting over who’s to blame for their losses.

With the conservative-projected “red wave” failing to materialize, the chambers of congress and Senate still exude a Republican lacking. The Senate is still held by Democrats who gained a seat with Senator John Fetterman’s election victory, a scenario of which last had precedence in 1934, and the House of Representatives gained a slim Republican majority. This conservative underperformance thwarted their hopeful red wave into a disappointing red splash

Their lack of soul-searching and refusal for recourse after the 2020 election plays a significant role in these flopping results.

Looking for a pundit to blame for their election failures, Republicans are in shambles trying to pinpoint their obvious culprit: Donald Trump. Many Republicans outside of Washington are eager to divert from the rails of the Trump train, while those with seats in government, in fear from his wrath, attempt to deflect it.

Trump, who pushed for extreme MAGA candidates across the board, and who was met with initial unyielding support in doing so, is now being ridiculed by moderates and conservatives alike for such efforts after they proved to be futile.

While midterm elections are usually reviewed as referendums on a current president, they rarely mark as one on a former president. However, Trump’s influence is being highlighted and questioned in prominent ways President Biden has not recently. Trump strived to revolve himself around this election, and he in part succeeded, yet not in the way he aimed for.

Aforementioned Republicans in office, however, are forming an opposing narrative. They’re predicting that Trump will still have a grasp on the party as a whole and hold a great deal of power over future primaries, and that denouncing him could cost them their Senate or congressional seats. Their deflection efforts in question have caused some GOP senators to zero on potential figures responsible for their failures, and most recently Senate Minority Leader Mitch McConnell.

McConnell, who’s attempts failed vastly to advance his endorsed candidates through primaries, generously backed Trump-endorsed nominees after his disappointment. Yet, Republican Senators like Marco Rubio of Florida and Cynthia Lummis of Wyoming are vilifying him nonetheless. Senator Josh Hawley of Missouri, like his colleagues, has joined in on the condemnation, claiming that the old Republican party McConnell is familiar with is dead and that it was time to birth something new. Even Trump has made his disfavor for the Senator obvious by endorsing Florida Senator Rick Scott as the next Senate party leader, McConnell’s potential opponent.

Republican leaders denouncing Trump then backing him in little time afterward has a precedent, though. Leading Republicans announced their severed ties with Trump after the January 6th insurrection, yet mended those ties and found their way back to his influence just weeks later.

Even through these postelection dilemmas within the party, two distinct pathways forward are still present: Continue embracing Trump’s leadership in every category of influence, or to overthrow him in hopes of actually gaining significant election victories.

Inter-party factions are equivalently distinct, with those outside the chambers of government voicing differing notions from those within them. Hence, Republican voters are listening to diverging narratives, and what they believe about the former president, whether he’s aiding their party or killing it, will be pivotal in determining the future of Republicanism as a whole. With Trump announcing his next presidential run, we as Americans will know very shortly which path the party is choosing. 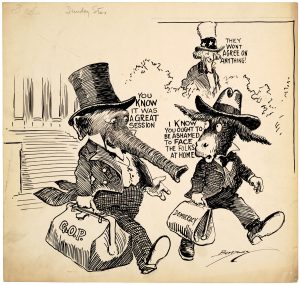