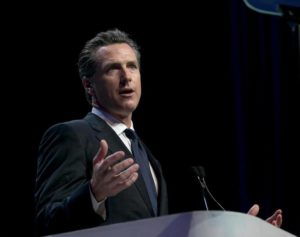 The second year of the coronavirus pandemic in California was shaped by two political undercurrents at the state Capitol: a budget awash with cash, thanks to a booming stock market and federal aid, and a looming recall election asking voters to throw Gov. Gavin Newsom out of office.

The massive budget surplus allowed Newsom and legislative Democrats to go big on a progressive agenda they believe will help the state recover from COVID hardships. They passed a $262.6 billion budget that includes preschool for all 4-year-olds, health insurance for low-income undocumented immigrants age 50 and older, and $600 stimulus payments for most Californians — landing in bank accounts just weeks before the Sept. 14 recall election.

Newsom found himself with so many dollars to spend that he gave away $115 million to encourage Californians to get the COVID-19 vaccine with a series of game-show style lotteries.

But gobs of money and Democrats’ supermajority didn’t make everything possible. Tensions between moderate and liberal Democrats stymied many proposals. The recall threat also may have doomed some legislation that might have reflected unfavorably upon California and its governor. Bills that stalled included proposals to create single-payer health care, ban corporate donations to political candidates, legalize psychedelic drugs, sanction clinics where addicts can use illegal drugs under medical supervision, and allow people to turn their bodies into garden compost after death. Progressive legislation to allow more offenders to have their records expunged and overhaul the bail system also stalled amid concerns over California’s rising murder rate and an especially brutal killing in Sacramento.

With epic wildfires burning in a state stricken by drought, lawmakers approved $1 billion for wildfire prevention but rejected a bill that called for reducing greenhouse gas emissions beyond current mandates, which officials have said California is already not on pace to meet. Democratic Senate leader Toni Atkins told reporters after the last night of the session wrapped up that such ambitious legislation may take more time to negotiate, and she expects that to continue next year.

The final night was unusually subdued compared with the chaos of the last two years. At the end of 2020, Republican senators were forced to vote remotely because of a COVID infection while Assemblymembers were required to vote in person, prompting one to make a late-night floor speech cradling her newborn baby. Not to mention the previous year, when the Senate was evacuated and a hazmat crew called in after an anti-vaccine protester tossed a menstrual cup of blood from the overhead gallery, splattering senators.

Amid the relative calm of 2021, lawmakers managed to send the governor hundreds of bills, which he has until Oct. 10 to sign or veto. With Newsom having defeated the Sept. 14 recall, the fate of these bills is in his hands. Here are 21 of the most interesting or consequential. We’ll keep updating his decisions as he makes them.