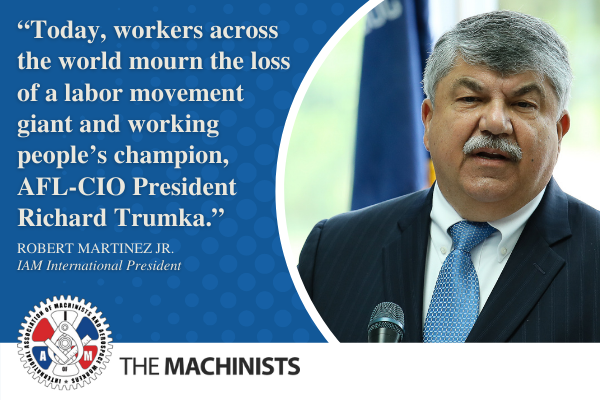 AFL-CIO President Richard Trumka is seen in 2019. The powerful labor leader has died.

Richard Trumka, the longtime head of the powerful AFL-CIO union and a close ally of Democratic Party leaders, has died. He was 72.

“The labor movement, the AFL-CIO and the nation lost a legend today,” the 12.5-million-member organization said in announcing his passing. “Rich Trumka devoted his life to working people, from his early days as president of the United Mine Workers of America to his unparalleled leadership as the voice of America’s labor movement.”

Liz Shuler, the secretary-treasurer of the federation, wrote on Twitter that even as the AFL-CIO mourns Trumka’s death, “we will stand on his shoulders to continue the fight for workers, and for the fair and just society he believed in so passionately. We will honor his legacy with action.”

Trumka had led the AFL-CIO since 2009. He was secretary-treasurer of the organization for more than a decade before that.

In 1982, at age 33, Trumka, who came from a coal mining family in Pennsylvania, was elected the youngest president of the United Mine Workers of America, according to the AFL-CIO.

Trumka’s passing set off a wave of condolences from unions and Democratic leaders.

“He had in his veins, in every atom of his body, the heart, the thoughts, the needs of the working people of America. He was them,” Senate Majority Leader Chuck Schumer, D-N.Y., said in emotional remarks on the Senate floor.

Schumer added: “The working people of America have lost a fierce warrior at a time when we needed him most.”

Trumka’s death comes as Biden and congressional Democrats seek to pass two massive spending plans that would inject funds into many union-heavy sectors.

Biden has long touted his connections to labor groups, and in mid-February, barely a month into his term, he gathered 10 union leaders in the Oval Office for a meeting that lasted two hours. Trumka was among that group.

“This president really does get it,” Trumka said after that meeting.