Trump Takes Up Call for Barr to ‘Clean House’ at Justice Dept.

Live Updates from the NY Times on the Pandemic 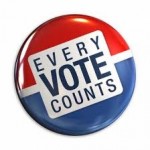 Party conventions are in jeopardy, campaigning is on hold and local candidates are playing the role of good Samaritan instead of traditional politician.

From the White House to the county courthouse, the coronavirus pandemic has drastically upended the 2020 elections.

Many Democratic leaders now doubt their national party convention will take place as planned in July, while President Trump’s determination to hold the Republican convention could collide with life-and-death realities.

Both Mr. Trump and former Vice President Joseph R. Biden Jr. are wary of holding public events too soon and may not engage in full-fledged campaigning until the summer.

And hundreds of congressional, statewide and local candidates, who are always overshadowed in presidential years, are turning to the role of good Samaritan — aiding with groceries and hiring people newly out of work in an effort to stay visible without being insensitive to the crisis. 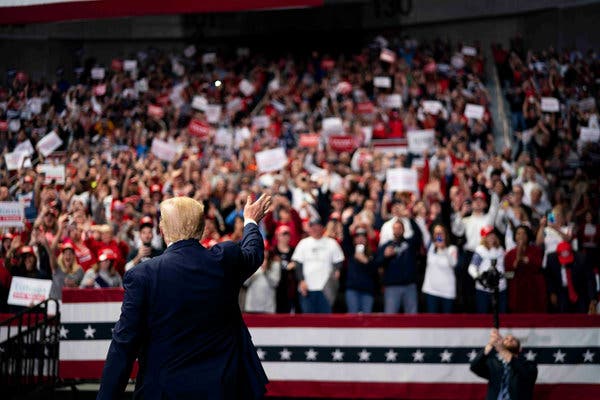 The virus has fundamentally transformed political life in America, affecting how candidates communicate with voters, raise money from donors and confront their opponents. This is for now the country’s first virtual campaign, as the risk of disease physically separates candidates from the people they seek to represent, and pushes officeseekers from Mr. Biden on down to appeal to homebound voters and contributors through balky web videos.

Even when more traditional electioneering resumes, the nature of this race will be profoundly different.

The outbreak, which has already claimed more than 2,000 lives in the United States and well over three million jobs, has thrust the public health threat and economic downturn to the forefront in races up and down the ballot this year.

Incumbents at every level, starting with Mr. Trump, will be judged on how they prepared for and steered the country through a crisis that has turned the life of nearly every voter upside down.

“This is the question that is going to dominate the election: How did you perform in the great crisis?” said Representative Tom Cole, Republican of Oklahoma, who has canceled fund-raisers and instead scheduled tele-town hall events with guests like the provost at the University of Oklahoma Health Sciences Center.

The duration of the election season itself is likely to shrink significantly. The presidential campaign, which typically dominates news coverage for much of the year, could look more like one of Britain’s six-week general election sprints. Should the two major American candidates return to the stump before the fall, they will most likely be crowded out by the grim accounting of the country’s worst pandemic in over a century.

Regional disparities in how the virus is spreading could mean that officeseekers may be able to campaign in parts of the country that are less hard-hit. And if the social distancing measures in place mitigate the outbreak, the contenders could return to the parade and banquet circuit sooner than some anticipate. 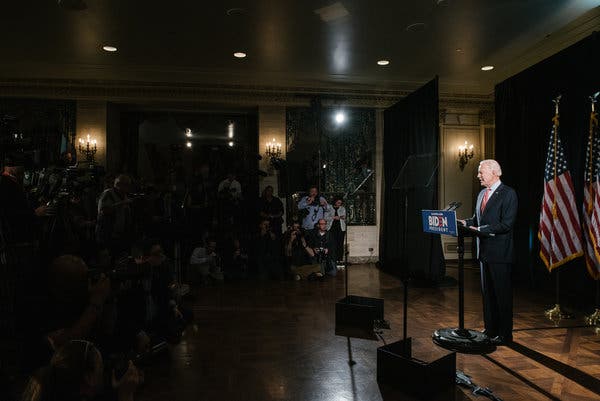 But until the spread of the virus slows, there is likely to be little interest in the presidential race and even less in state and local races.

Representative Sean Casten, Democrat of Illinois, has culled his campaign’s phone bank list to voters 60 or older. Rather than ask them policy questions or trumpet his accomplishments, Mr. Casten’s volunteers ask if they need any “health and safety information” and provide a list of senior-only hours at local supermarkets.

“Nobody wants to talk about my thoughts on carbon pricing,” said Mr. Casten, who was a renewable energy executive before he was elected to Congress in 2018.

At the moment, there effectively is no campaign of any consequence to voters who are consumed with their family’s safety and well-being.

The long sweep of American history is filled with presidential elections that took place during times of war and upheaval, but there is little modern precedent for a campaign unfolding against a backdrop of such widespread national fear.

The closest comparison may be the New York mayoral race in 2001, when the Sept. 11 terrorist attacks loomed over the city’s general election. In presidential politics, the Vietnam War, assassinations and civil rights struggles shaped the 1968 campaign and seemed to reveal a country coming apart.

But some historians believe the closest comparison to this year, the last time the entire nation was consumed by a single issue, may be 1944, when the threat of Nazi Germany and imperial Japan fully mobilized American citizens behind the war effort.

“That was the last time there was this sort of disruption in our daily lives and change in rituals,” said Doris Kearns Goodwin, the presidential scholar, noting that millions were deployed in arms and those who remained home lived with rationed goods. “But at least people then could go to work, be part of the effort to win the war.”

Sensing opportunity, Mr. Trump has sought to portray himself as a wartime leader in daily televised news briefings. It has given him a bump in the polls, with his approval ratings creeping up toward 50 percent as independents and some Democrats rally behind him, while Mr. Biden, the likely Democratic nominee, is largely drowned out by the president and even Gov. Andrew M. Cuomo of New York.

“It’s a defining moment,” said Henry Barbour, a Republican National Committee member from Mississippi, adding of Mr. Trump: “The more he reassures Americans, gives them the facts and delivers results, the harder it will be for Joe Biden.” 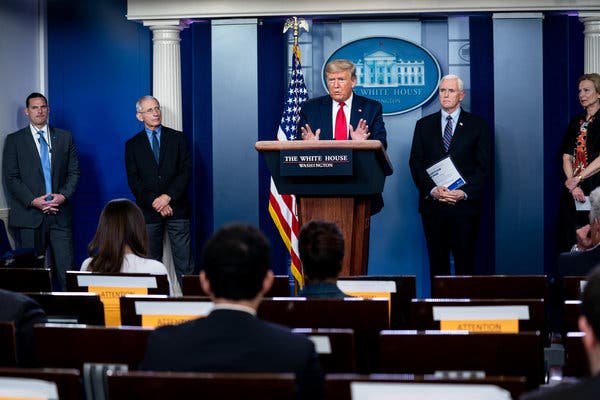 A race that turns entirely on the response to the current health and economic crises could also render other traditional campaign markers less important — if they happen at all.

While Mr. Trump is loudly insisting his convention will go on in Charlotte, N.C., in late August, it remains to be seen whether the Democratic governor, Roy Cooper, would allow such a large gathering in his state’s most populous city.

Democratic officials are even more skeptical about their convention.

Hundreds of local and state conventions have already been canceled or become mail-in, telephone or online events. There’s talk among some Democrats of conducting the national convention online or through the mail, with some operatives and fund-raisers discussing a one-night television event that could replicate a star-studded awards show.

“The D.N.C. is going to have to start considering that this convention will have to be held in other ways,” said Ken Martin, the Democratic chairman in Minnesota who is also the president of an organization of state Democratic leaders.

For now, Democrats are using a barrage of ads to try to remind voters of Mr. Trump’s initial dismissal of the virus’s severity, but it’s been difficult to broadly divert attention from the threat of the moment.

Some in the party, however, believe the president will ultimately be held to account for his slow response, the unfolding damage to the economy and will suffer from the new light the crisis will cast on domestic issues in the fall.

“The administration’s court case to repeal the A.C.A. takes on a very different meaning,” said Guy Cecil, who runs a Democratic super PAC, referring to the legal effort to strike down Obamacare in its entirety.

But the larger question for Mr. Trump may be whether he can sustain the appearance of a wartime leader able to summon Americans to sacrifice.

The president has already displayed impatience and pique that could damage his re-election chances, lashing out at governors, refusing to take any responsibility for the coronavirus crisis and suggesting Americans can return to life as usual in a way that experts say could exacerbate the spread of the virus.

His campaign is already discussing the possibility of a rally-style event in one of the less-affected states in late April, although one adviser said those discussions are preliminary.

While they would have preferred to use the months before Mr. Biden formally claims the nomination to define the former vice president to their advantage, Republicans generally believe this crisis has done little to diminish Mr. Trump’s prospects.

His campaign continues to raise money online at a brisk pace, but Republican officials privately conceded it has been harder to raise money without events featuring the president.

Fund-raising has been even more difficult for other candidates on the ballot, who often rely more on big-dollar, in-person events rather than internet solicitations.

Corry Bliss, a Republican strategist, said he expects fund-raising totals for federal candidates from the first three months of the year to be down about 20 percent from what they would have been without the pandemic.

In Missouri, Nicole Galloway, the state auditor and a Democrat, is running for governor. On Thursday night she held a “virtual cocktail hour” by teleconference with a few dozen invited supporters.

With framed photos of her three children over her shoulders, Ms. Galloway told about 60 supporters that Missouri’s Republican governor has been following her lead in responding to the pandemic, answered questions about education funding and professed sadness that she couldn’t travel the state in person.

In the small frames atop the screen, supporters could be seen pouring and mixing drinks. One Missouri donor had distributed a recipe for a drink called “The Democrat,” inspired by the native son Harry Truman’s fondness for bourbon.

Ms. Galloway is hardly the only candidate being creative.

In Georgia, Lynne Homrich, a Republican running for the House, announced her campaign would hire 20 people who had been laid off from local businesses, augmenting a paid campaign staff of five ahead of her May 19 primary.

Ms. Homrich, a former Home Depot executive, began sorting through dozens of emails from people seeking campaign staff work — which in the age of virus means calling or writing people from one’s own home. 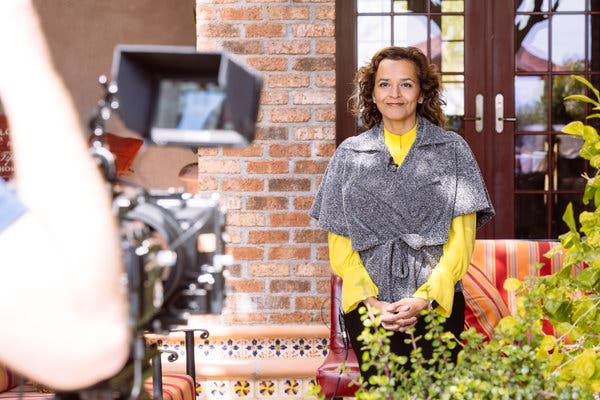 Hiral Tipirneni, a former emergency room doctor running for Congress in Arizona, said she spends just as much time explaining the details of the pandemic — in phone calls, video chats and during Facebook Live sessions — as she does asking people to vote for her in November.

“They have medical questions,” Ms. Tipirneni said. “It’s a scary time and whatever I can do to alleviate some of those fears, it’s a moral responsibility.”