Our Team in Action! 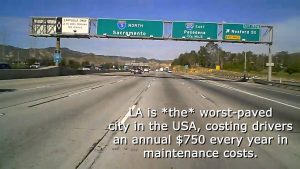 Text of this bipartisan approved bill here at this link: https://leginfo.legislature.ca.gov/faces/billNavClient.xhtml?bill_id=201720180SB1

The recall against our State Senator SD29 is unwarranted considering the following. In fact, he promoted a Constitutional amendment to assure the monies allocated would be spent on only the road repair projects.

The Legislature finds and declares all of the following:
(a) Over the next 10 years, the state faces a $59 billion shortfall to adequately maintain the existing state highway system in order to keep it in a basic state of good repair.
(b) Similarly, cities and counties face a $78 billion shortfall over the next decade to adequately maintain the existing network of local streets and roads.
(c) Statewide taxes and fees dedicated to the maintenance of the system have not been increased in more than 20 years, with those revenues losing more than 55 percent of their purchasing power, while costs to maintain the system have steadily increased and much of the underlying infrastructure has aged past its expected useful life.
(d) California motorists are spending $17 billion annually in extra maintenance and car repair bills, which is more than $700 per driver, due to the state’s poorly maintained roads.
(e) Failing to act now to address this growing problem means that more drastic measures will be required to maintain our system in the future, essentially passing the burden on to future generations instead of doing our job today.
(f) A funding program will help address a portion of the maintenance backlog on the state’s road system and will stop the growth of the problem.
(g) Modestly increasing various fees can spread the cost of road repairs broadly to all users and beneficiaries of the road network without overburdening any one group.
(h) Improving the condition of the state’s road system will have a positive impact on the economy as it lowers the transportation costs of doing business, reduces congestion impacts for employees, and protects property values in the state.
(i) The federal government estimates that increased spending on infrastructure creates more than 13,000 jobs per $1 billion spent.
(j) Well-maintained roads benefit all users, not just drivers, as roads are used for all modes of transport, whether motor vehicles, transit, bicycles, or pedestrians.
(k) Well-maintained roads additionally provide significant health benefits and prevent injuries and death due to crashes caused by poorly maintained infrastructure.
(l) A comprehensive, reasonable transportation funding package will do all of the following:
(1) Ensure these transportation needs are addressed.
(2) Fairly distribute the economic impact of increased funding.
(3) Restore the gas tax rate previously reduced by the State Board of Equalization pursuant to the gas tax swap.
(4) Direct increased revenue to the state’s highest transportation needs.
(m) This act presents a balance of new revenues and reasonable reforms to ensure efficiency, accountability, and performance from each dollar invested to improve California’s transportation system. The revenues designated in this act are intended to address both state and local transportation infrastructure needs as follows:
(1) The revenues estimated to be available for allocation under the act to local agencies are estimated over the next 10 years to be as follows:
(A) Fifteen billion dollars ($15,000,000,000) to local street and road maintenance.
(B) Seven billion five hundred million dollars ($7,500,000,000) for transit operations and capital.
(C) Two billion dollars ($2,000,000,000) for the local partnership program.
(D) One billion dollars ($1,000,000,000) for the Active Transportation Program.
(E) Eight hundred twenty-five million dollars ($825,000,000) for the regional share of the State Transportation Improvement Program.
(F) Two hundred fifty million dollars ($250,000,000) for local planning grants.
(2) The revenues estimated to be available for allocation under the act to the state are estimated over the next 10 years to be as follows:
(A) Fifteen billion dollars ($15,000,000,000) for state highway maintenance and rehabilitation.
(B) Four billion dollars ($4,000,000,000) for highway bridge and culvert maintenance and rehabilitation.
(C) Three billion dollars ($3,000,000,000) for high priority freight corridors.
(D) Two billion five hundred million dollars ($2,500,000,000) for congested corridor relief.
(E) Eight hundred million dollars ($800,000,000) for parks programs, off-highway vehicle programs, boating programs, and agricultural programs.
(F) Two hundred seventy-five million dollars ($275,000,000) for the interregional share of the State Transportation Improvement Program.
(G) Two hundred fifty million dollars ($250,000,000) for freeway service patrols.
(H) Seventy million dollars ($70,000,000) for transportation research at the University of California and the California State University.
(n) It is the intent of the Legislature that the Department of Transportation meet the following preliminary performance outcomes for additional state highway investments by the end of 2027, in accordance with applicable state and federal standards:
(1) Not less than 98 percent of pavement on the state highway system in good or fair condition.
(2) Not less than 90 percent level of service achieved for maintenance of potholes, spalls, and cracks.
(3) Not less than 90 percent of culverts in good or fair condition.
(4) Not less than 90 percent of the transportation management system units in good condition.
(5) Fix not less than an additional 500 bridges.
(o) Further, it is the intent of the Legislature that the Department of Transportation leverage funding provided by this act for trade corridors and other highly congested travel corridors in order to obtain matching funds from federal and other sources to maximize improvements in the state’s high-priority freight corridors and in the most congested commute corridors.
(p) Constitutionally protecting the funds raised by this act ensures that these funds are to be used only for transportation purposes necessary to repair roads and bridges, expand the economy, and protect natural resources.
(q) This act advances greenhouse gas reduction objectives and other environmental goals by focusing on “fix-it-first” projects, investments in transit and active transportation, and supporting Senate Bill 375 (Chapter 728, Statutes of 2008) and transportation plans.

This act shall be known, and may be cited as, the Road Repair and Accountability Act of 2017.